Goblinwatch is the local name of border tower abandoned by the Imperium almost a century ago. Since that time it has been occupied by bandits and brigands, haunted and the site of demon possession. The ruins have been raided by adventurers, freebooters, and once a roving monk.

The walls of the small fortress and tumbled down and riddled with gaping holes. The upper floors are collapsed and there are tumbled down stones all around the perimeter. In the center of the courtyard is an old well. Local legend says it had gone dry even before the garrison had abandoned the post. When the place was a bandit lair the bandits would throw their captives who were worth no ransom prisoners down into the useless well, earning it the sobriquet "The Murder Hole."

The flagstones in the courtyard are exceptionally thick and relatively clear of debris and overgrowth, unlike the perimeter of the structure which is overgrown with all manner of trees, bushes, and brambles native to Keppelshire. 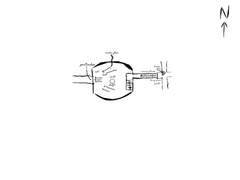 Goblinwatch, Map 1, centred on: well room, below the Murder Hole (in progress)
Add a photo to this gallery
Retrieved from "https://murderhole.fandom.com/wiki/Goblinwatch?oldid=4194"
Community content is available under CC-BY-SA unless otherwise noted.