Sonskyn Whitethistle is a quiet, pretty girl. She wears a suit of padded armour with the silhouette of a swift embroidered on the front and carries a quarterstaff which she also uses as a walking staff. An "elfkin" - her father's mother was a pure elf who had "dallied briefly" with a human lover - she definitely exhibits some of the traits of her elven heritage, some of which she likes (such as her slightly pointed ears and exotically angular, violet eyes) but others, not so much (such as the slowing of the aging process - despite having passed her 29th year, she is still regularly dismissed as being a mere 15 or 16 year old human by strangers who failed to notice her elf traits. This annoys her).

Sonskyn grew up among the bolts of cloth, spools of thread, pins and needles of "The Silk Thread", her parents' clothier shop in the heart of Arl's Grange - a shop that had been in her mother's family for generations and is among the most popular clothier shops among the Barony of Brightwall's nobility. As a young teen, she was expected to work in her parents' shop and she did enjoy learning to take measurements, make patterns, cut and sew fine cloth, but what made her heart leap was when she hadcthe chance to learn about things from distant lands so she frequently spent her spare time reading stories and personal journals by travellers and adventurers. She yearned to hear more than the stories that were in the books she could lay her hands on though so, as everyone knows Veiloaria's Flower and Compass inns are where the best adventurer's stories sprang into life, she started haunting the common room of the local establishment whenever she wasn't expected to work at the shop, spending her time drinking in the stories of the travellers who passed through.

The Keeper of the hostel in Arl's Grange recognized the divine "spark" in Sonskyn and dedicated a lot of time introducing her to Veiloaria's teachings and the duties The Wayfinder expects of her ordained followers. By the time she was 20, Sonskyn came to realize that her Goddess was calling so, after she received her parents' blessing, she moved into the Flower and Compass and joined Veiloaria's Order under the Keeper's tutelage.

Despite being dedicated to the goddess of adventurers and travel she is still a "town girl" at heart. Prior to this trip to Keppelshire with Xia Jaina , she had never travelled further from Arl's Grange than a single day's ride. 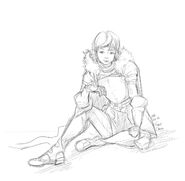 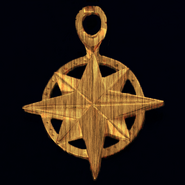 Wooden Compass Rose - Holy Symbol of Veiloara
Add a photo to this gallery
Retrieved from "https://murderhole.fandom.com/wiki/Sonskyn_Whitethistle?oldid=4268"
Community content is available under CC-BY-SA unless otherwise noted.